Our 5th Annual Chamber Music Festival features ten of the world’s finest musicians who will inspire you with extraordinary performances set in the relaxed atmosphere of The Ranch. In addition to daily concerts, enjoy music workshops, the occasional “random act of music,” and performer talks. Guests are encouraged to bring a musical instrument!

The highlights of the festival are performances that combine “Carnegie Hall” artistry with relaxed discourse. Whether held at La Cocina Que Canta, Oaktree, Bazar del Sol or the Dining Hall, you will leave feeling invigorated, inspired and possibly transformed.

Sunday, 8 PM: “Broken Hearts and Madmen” The week kicks off with a haunting exploration of the romantic soul inside us all as the Gryphon Trio and Patricia O’Callighan perform rancheros and love songs from South and Central America.

Tuesday 8 AM: Breakfast hike and concert with WindSync

Wednesday 8 AM: Breakfast hike and concert with Gryphon Trio

Wednesday, 5 PM: WindSync performs a joyful program in the backdrop of Mt. Kuchuuma, connecting us with nature through their choreography and storytelling.

Friday, 5 PM:  “Encore!” Relax with a glass of wine as festival artists say farewell with a dazzle of encores. 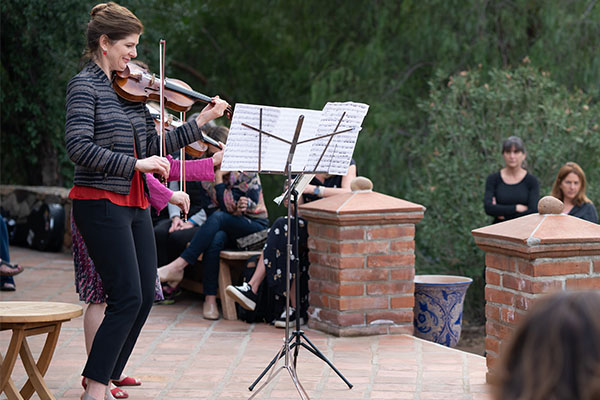 Offering a peek behind the scenes, musicians invite you to listen in during two open rehearsals with time for questions at the end.

Festival musicians present three musical talks to share their perspectives on the music scene today and offer insights into the music they’ll be performing.

During the solitude of Covid-shutdown, many people have taken up a new instrument or revived the music practice of their youth. In this series of classes, Monique Mead teaches a mindful approach, promoting joyful practice and fruitful results. Guests are encouraged to bring their musical instruments (and a practice mute).

This week, it’s likely that you will be disarmed by the beauty of music when you least expect it, perhaps on a hike, during yoga, or at the labyrinth.  Festival musicians are dedicated to enhancing the serenity of the Ranch in their own delightful ways.

Gryphon Trio is firmly established as one of the world’s preeminent piano trios. It has earned acclaim for more than 25 years, and impressed international audiences with its highly refined, dynamic, and memorable performances. The Trio’s repertoire ranges from traditional to contemporary, and from European classicism to modern-day multimedia. It is committed to redefining chamber music for the 21st century.

Violinist Annalee Patipatanakoon, cellist Roman Borys, and pianist Jamie Parker are creative innovators with an appetite for discovery and new ideas. They have commissioned over 85 new works, and they frequently collaborate with other artists on projects that push the boundaries of Classical music. The Trio tours regularly throughout North America and Europe. It enjoys longstanding relationships with prominent arts incubators and presenters like Banff Centre for Arts and Creativity, Orford Music Academy, Music Toronto, Ottawa Chamberfest, and Festival del Lago International Academy of Music in Ajijic, Mexico. Gryphon Trio often performs triple concerti with the world’s major symphony orchestras and smaller chamber orchestras.

WindSync has established itself as a vibrant chamber ensemble performing wind quintet masterworks, adapting beloved music to their instrumentation, and championing new works by today’s composers. The quintet eliminates the “fourth wall” between musicians and audience by often performing from memory, creating an intimate connection. This personal performance style, combined with the ensemble’s three-pronged mission of artistry, education, and community-building, lends WindSync its reputation as ”a group of virtuosos who are also wonderful people, too.” (Alison Young, Classical MPR)

WindSync (comprised of Garret Hudson, flute; Emily Tsai, oboe; Julian Hernandez, clarinet; Kara LaMoure, bassoon; and Anni Hochhalter, horn) launched an international touring career after winning the 2012 Concert Artists Guild Victor Elmaleh Competition and the 2016 Fischoff National Chamber Music Competition. In 2018, they were medalists at the M-Prize Chamber Arts Competition. WindSync has appeared in recital the Met Museum, Ravinia, Shanghai Oriental Arts Center, and Weill Recital Hall at Carnegie Hall. In 2015, the  Library of Congress invited the quintet to perform the world premiere of Paul Lansky’s “The Long and the Short of it,” commissioned by the Carolyn Royall Just Fund and the Chamber Music Society of Lincoln Center. Other premieres include “The Cosmos,” a concerto for wind quintet and orchestra by Pulitzer finalist Michael Gilbertson, and works by Ivan Trevino, John Steinmetz, Marc Mellits, and Erberk Eryilmaz.

Patricia O’Callaghan is something of a wandering minstrel, with six solo albums and many interesting collaborations along the way. A speaker of French, Spanish, and German, her early recordings focused on European cabaret, but one of Patricia’s most unique talents is the ability to blend a variety of languages and musical genres seamlessly together in her concerts, and completely embody whatever style she is singing at any given moment. “This Toronto soprano can sing a 100-year-old German tune so lustily that you almost don’t need a translation to know that someone’s about to get his throat cut or get laid or both.” (THE NATIONAL POST) “O’Callaghan sings her diverse material as if it was always meant to go side-by-side, and by the end of the evening, it’s easy to believe her.” (CHART ATTACK)

She has sung with some of the world’s great ensembles and artists (Orpheus Chamber Orchestra, Don Byron Quartet, Bryn Terfel), and has performed in venues that range from London’s Royal Opera House to New York’s Noho cabaret Le Poisson Rouge.

Patricia also writes and co-writes songs and has had the honor of premiering many new compositions from both the classical and pop worlds.  It has been her great privilege to work with such creators as R. Murray Schafer, David Braid, Dennis Lee, Christos Hatzis, George Aperghis, Steve Reich, and Steven Page, to name a few.

A passionate ambassador of classical music, violinist Monique Mead enjoys a rich career as a performer, educator, and innovator. Inspired and mentored by Leonard Bernstein, Mead has devoted her performing career to nurturing new audiences and deepening the musical experience for seasoned concertgoers. Her programs with major orchestras and festivals in the United States and Europe have drawn international acclaim for their popular appeal and innovative approach.

In 2012 Mead founded the Music Entrepreneurship program at Carnegie Mellon University. With a focus on experiential learning, she collaborates with world-class musicians in helping students develop a broad range of skills and take an innovative approach to professional life.

She currently performs on a 1717 Stradivarius, graciously made available by Carnegie Mellon University.

Spend a week at Rancho La Puerta, one of the world’s top destination wellness resorts, set on thousands of acres of wildlands and landscaped gardens. Customize an ideal routine to energize your body, calm your mind and lift your spirits. In addition to extraordinary musical experiences throughout your week, we offer:

To find out more or make a reservation during Chamber Music Festival Week please fill out the form below.

By filling out this form you will be enrolled to receive Rancho La Puerta e-communications. You can opt out at any time.