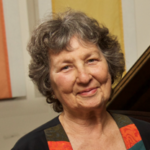 Janet Guggenheim is the pianist in the video, “Perlman Live in Russia.”  For 30 years she collaborated with violinist Itzhak Perlman, including concerts in Mexico City, Hong Kong, Taipei, Istanbul, and Moscow. She appeared numerous times on the Johnny Carson “Tonight” Show with Perlman and Nadja Salerno-Sonnenberg, as well as with Yo Yo Ma.  She was pianist for the Pablo Casals Master Classes in Berkeley, televised on PBS. She has given recitals throughout Europe. With Michael Grebanier, she recorded the complete cello works of Rachmaninoff. She made her orchestral debut at the age of 16 with the San Francisco Symphony. A graduate of U.C. Berkeley, she received a master’s degree from the Juilliard School, received the Joseph Lhevinne scholarship, and won the Juilliard Concerto competition. She has been on the faculties of U.C., Dominican and Portland State University. 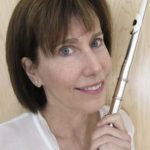 Martha Aarons’ professional career began with her appointment as principal flute of the North Carolina Symphony. Subsequently she played with the Cleveland Orchestra for 25 years.  After becoming a freelancer she performed often with the Philadelphia Orchestra. During this time she appeared as guest principal flute with the Metropolitan Opera, Minnesota Orchestra, Milwaukee Symphony, San Diego Symphony, Baltimore Symphony, and Mostly Mozart Festival. Ms. Aarons served as Artist Faculty with the Aspen Music Festival for 19 years. Her teaching credits include the Cleveland Institute of Music, Duke University, University of North Carolina/Chapel Hill, Oberlin College, Skidmore College, Shanghai Conservatory and Eastman School of Music. She has been soloist with the Cleveland Orchestra, North Carolina Symphony, Ohio Chamber Orchestra, and with the Aspen Festival Chamber and Festival orchestras. Her first solo CD, The History of the Tango, is recorded on the Azica label and additionally features pianist Frances Renzi and Grammy-winning guitarist Jason Vieaux.  Her newest release is the CD Last Silence with violinist Lev Polyakin and pianist Frances Renzi.  Martha is also an avid runner and has qualified for her third consecutive Boston Marathon in April 2023.  Congratulations!

Lev Polyakin was appointed co-concertmaster of the Moscow Chamber Orchestra at age 21. In that position he was regularly featured as soloist. In the U.S. he served as assistant concertmaster of the Cleveland Orchestra, as well as concertmaster of the American Academy of Conducting in Aspen Music Festival. Lev has won several prizes in international violin competitions, including the Beethoven Prize in Carl Flesch in London, and Gold Medal and Special Prize in Brescia, Italy. In addition to solo performances with the Moscow Chamber Orchestra, he has appeared as soloist with the London Mozart Players, Royal Philharmonic, and Cleveland Orchestra. Recording credits include Melodia, BBC, National Public Radio, and Decca. He is prominently featured on an album entitled Cafe Music comprising chamber music by Paul Schoenfield, which was nominated for a Grammy.  Lev has a special interest in jazz and has recorded three CDs, entitled Russian Blue, The Other Side of the Road, and Christmas Kaleidoscope.  He is also featured in the recent release by Azica Records entitled Last Silence, with flutist Martha Aarons and pianist Frances Renzi.