Solo Concert: “Up Close with Daryl Stuermer”
Daryl Stuermer of Genesis & Phil Collins will perform a solo concert with his “MacBook Pro Band.” You will experience an eclectic mix of his melodic, jazz-rock-fusion solo compositions, as well as rocking out with some of his favorite songs and stories from the Genesis years.

Music Inspiration
Songs, stories and fun facts about how different sounds are created on the electric guitar. Hear famous riffs and licks from the 1960’s to the present. Informal Q & A format. 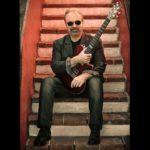