Mimi invites the audience to be part of her improvisational jukebox!  Participants pick a musical genre and key and Mimi will then play a song on the spot…from swing to rhythm and blues, from Sambas to the Beatles and beyond, this will be a musical Smorgasburg for one and all! 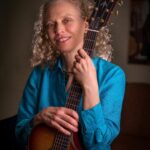 Internationally renowned guitarist/composer/recording artist Mimi Fox has been named a winner in six consecutive Downbeat Magazine international critic’s polls and has been recognized by writers and colleagues alike as one of the most eloquent guitarists on today’s scene. In one of many feature stories, Guitar Player Magazine hailed Mimi as “a prodigious talent who has not only mastered the traditional forms but has managed to reinvigorate them.” In a further nod to Mimi’s guitar artistry, and in conjunction with Heritage Guitars’ 30th anniversary, the historic Kalamazoo guitar company has rolled out the Mimi Fox Artist Signature model.  Mimi has performed/recorded with some of the music world’s most commanding players, including fellow guitarists Charlie Byrd, Stanley Jordan, and Charlie Hunter, Grammy-nominated saxophonists Branford Marsalis, David Sanchez, Houston Person, and the late Don Lanphere, vocalists Abbey Lincoln, Diana Krall, Kevin Mahogany, and Janis Siegel (Manhattan Transfer), B3 organ masters Joey DeFrancesco, Barbara Denerlein and Dr. Lonnie Smith, and powerhouse drummer Terri Lyne Carrington. She has also shared the stage with numerous legends such as Stevie Wonder and John Sebastian. Her YouTube videos have received hundreds of thousands of views. 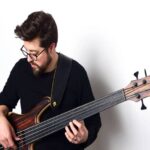 Jeff Denson has balanced a full career as both an acclaimed performing musician and a highly respected educator. Jeff has recorded 16 albums as a leader or co-leader and has toured extensively throughout North America and Europe with both his own groups, worked with some of jazz’s finest artists such as Brian Blade, Jane Ira Bloom, Dave Douglas, Cuong Vu, Ralph Alessi, Walter Smith III, Dayna Stephens, Mimi Fox, Florian Weber, Paul Hanson, Romain Pilon, Edward Simon and had an ongoing relationship with the legendary Lee Konitz for over a decade. Jeff is the Dean of Instruction of the California Jazz Conservatory and Chair of the Bass Department.