Learn more
Viva Vivaldi!
Hear “The Four Seasons” with a fresh perspective as Scott Marrone leads us through this most popular of musical works. You will never hear it the same way again! Discover the creativity and ingenuity found in Vivaldi’s delightful masterpiece “The Four Seasons.” While the immediate impression of this great work is a set of four violin concertos, closer examination reveals a wealth of symbolism and actual story lines within the musical themes and various movements. Join Scott Marrone as we listen to and explore the program contained in these beloved musical gems. Find a new way to hear and understand this classic work, making it more personal, concrete, and enjoyable!

Piano Recital: An Evening of Chopin, Brahms and Debussy
A beautiful performance after dinner. 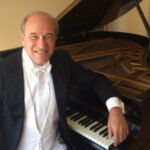 John Scott Marrone has been recognized as an outstanding conductor and director of many musical organizations. His experience covers the entire spectrum of orchestral and choral music from Renaissance to Contemporary, leading an impressive array of performing organizations both in the United States and Europe. In addition to his own Allegro Chamber Ensemble, Mr. Marrone has worked with the English Chamber Orchestra, Solisti di Roma, Orchestre de Paris, Oratorio Society of New York, Mendelssohn Choir of Connecticut, Greenwich Choral Society, and many other organizations including concerts and tours. His choir performed for Pope John Paul II in St. Peter’s Basilica and at the papal audience before 250,000 people in Rome. With the Allegro Chamber Ensemble, Mr. Marrone performed a series of concerts at the Salzburg Music Festival, St Martin-in-the-Fields in London, and at the Sainte Chapelle in 1994 for the 50th anniversary of the Liberation of Paris. With his choirs he has conducted at St. Mark’s Basilica in Venice, Notre Dame Cathedral in Paris, Westminster Abbey in London, the Duomo in Florence and many other locations throughout Europe. Mr. Marrone holds a Professional Diploma in Piano from the Brooklyn Conservatory and a Master’s in Conducting from Columbia University.