Chats with Barry with Laura Pauli - Rancho La Puerta Learn about our health and safety protocols. 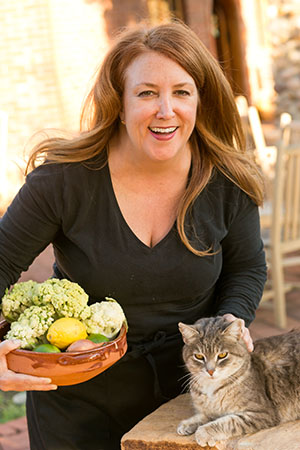 Laura’s love of food and wine began in her Italian grandmother’s kitchen as she rolled homemade pasta, kneaded focaccia, stewed Bolognese sauce, sliced biscotti and pressed pizzelles. It picked up a few decades later when Laura received her Grand Diplôme in Classic Culinary Arts with Artisanal Baking from the French Culinary Institute.

While in New York, Laura cooked for and assisted some of the world’s best chefs, many at the renowned James Beard House including Alice Waters, Morimoto, Mario Batali, and more.

After cooking school, Laura cooked at Farallon in San Francisco and followed as back kitchen chef on three of Jacques Pépin’s PBS cooking shows.

She moved to France in May 2004 where she cooked her way around the country from the Côte d’Azur cooking at the Cannes Film Festival to a lobster boat in Brittany to the world famous Pierre Hermé Patisserie to the 3 Michelin star Four Seasons George V. Laura cooked for the legendary Olivia De Havilland and was the chef at the chateau featured in the DaVinci Code movie, the highlight being on set during the filming.

Laura kicked off 2017 with a formal focus on wine, passing the Court of Master Sommeliers’ Certified Sommelier exam with the goal of bringing a more expansive wine knowledge to her cooking. When Shelter in Place was mandated, Laura pivoted to host online, live cook-alongs showcasing local farmers, fishmongers, producers, winemakers, distillers, fitness experts, musicians and singers. You can find Laura here: https://cucinatestarossa.blogs.com/
Bon appetit and cheers!