Learning to Love your Looks with Vivian Diller Ph.D. - Rancho La Puerta Learn about our health and safety protocols. 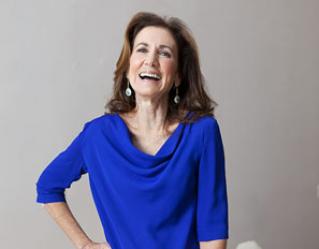 Recently at The Ranch, I went to a very enlightening class about beauty and aging. Vivian Diller, a former model and ballet dancer, now a psychologist, spoke about our culture’s obsession with youth and attractiveness. The name of the class was “Replace Magic Potions with Cognitive Solutions” and I  have to say, it was one of the most interesting classes I’ve ever taken at The Ranch. Aging and beauty is something that most women, and even men, think about on a daily basis.  Especially when society places such a big emphasis on looking youthful, as opposed to aging gracefully.

Not only is this point of view affecting women as we get older, but it also has a huge affect on young girls who grow up with a skewed view of what it is to look beautiful. Mainly because the person we see on a billboard, in a magazine, and on television is really not that person at all. Thanks to photo editing, a model who is already beautiful, can be tweaked to look otherworldly. Take a look at the video below to see what I mean.

Vivian showed this video from back in 2006 during her class. Imagine what advertising campaigns can do now with the advances in technology. I think I actually remember seeing this video back then, but it was just as shocking to see it today. I’m glad to say that today, I don’t really pay much attention to advertising campaigns. But when I was younger, I was pretty obsessed with fashion magazines, comparing myself to models and thinking I had to look like them, which is pretty ridiculous when I think about it now. However, with young girls growing up today looking at these models in advertisements for inspiration, it’s no wonder that most girls and women have distorted views about their looks. Who can live up to these computer generated images? No one. Not even the models.

Vivian mentioned that eating disorders and plastic surgery are on the rise. Trying to be thin and look young has become a part of our culture. And it’s not just in the U.S., but also widespread across Europe and Asia. Vivian suggested that instead of trying to look permanently youthful, why not focus on taking care of yourself and try to look good for your age? This is something that has been on my mind now that I’m approaching my mid 30s as I’m realizing my 20s are really gone and that I’ll be in my 40s soon enough.  There is a part of me that doesn’t want to let go of my youth, but there’s another side of me that is exhausted by trying to look young. Thinking about it actually makes me look tired. All in all I’m pretty happy with the way I look now, but I can’t lie, aging scares me a little. I’ve found that the good thing about getting older is that I care less about the way I look and more about taking care of myself. The result has been that I look better (way better) now than I did in my early 20s.

Another interesting point that Vivian made is that our culture views aging as a disease. This is so true, isn’t it? The fact is that there is nothing we can do about aging. It’s going to happen no matter what, so we might as well accept it. Easier said than done, right? When we’re bombarded with ads and slogans all about anti-aging, it’s hard to feel good about aging. But it’s really all about perspective, which is the crux of what Vivian’s class was about. Confidence, treating your body well, how you carry yourself and how you treat people will make you more attractive, no matter what your age is. And I wholeheartedly agree with her about that.