Origins of the Ranch, Part IV - Rancho La Puerta Learn about our health and safety protocols.

In which Florence Mahon, a health refugee from England, and her friends continue their rigorous, ascetic exercise and diet program in search of cures for their various diseases and infirmities. The retreat took place in 1935 on the shore of Lake Elsinore in Riverside County, California—an area also attractive for its healing hot springs and year-round warm weather—and was hosted by Purcell Weaver and Edmond Szekely. Five years later Edmond and new bride Deborah opened the first summer health camp at Rancho La Puerta in Tecate; “$17.50 a week. Bring your own tent!” proclaimed the founders. 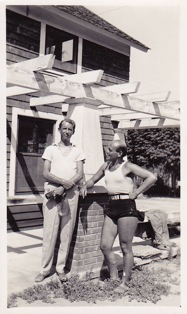 [The following is from “Through the Cure with Professor Szekely” by Florence Mahon.]

After the water exercises [in Lake Elsinore] came land exercises. There were two of them: one standing up with the trunk and arm movement, and the other lying down with an upward leg movement. These were designed by Szekely, and he emphasized that if they were done regularly combined with breathing, other exercises were superfluous. It was recommended to do the lying down exercises direct on the earth so as to get the earth’s radiations.

[Editor’s note: the latest trend in 2013 is known as “Earthing,” which emphasizes direct contact with the earth. Once again, Szekely was 80 years ahead in offering teachings that most spa leaders and guests today consider “new.”)

It was pointed out that all pain was due to an accumulation of morbid matter, so movement and respiration, not rest, were the best way to get rid of it.

The process of alternate sun-bathing, water-bathing, and land exercises went on all through the morning until noon, when we went back to the house to prepare our individual meal. More often than not, I felt that I would never reach the house—which was only a few yards away—for I was so weak.

We each had our own little food cupboard, and we each chose our food from the list of things that were allowed. Purcell used to do all the shopping, so as to keep temptation from us. The midday meal consisted chiefly of fresh fruit, with a very little oat flakes and dried fruits. The total was not more than one pound and a half, which we religiously weighed up every day.

The reason given for having juicy fruits at midday was that the body had absorbed liquid during the morning and that it was now ready for more liquid. The fresh fruit was recommended on the grounds that it was a means of absorbing internally the radiations of the sun, water, air, and earth in an accumulated form. We were advised to chop everything up very small and eat it slowly with a teaspoon from a bowl. We were to chew each mouthful fifty times to allow the saliva to mix with the food. Thus we would get the best possible benefit from the food and at the same time not put too much work on the digestive organs.

The washing-up and cooking problem was solved, as each prepared his own meal. The only crocks we had the whole of the time were a bowl, a knife for chopping up the food, and a teaspoon, and not more than three mixtures were advised, and these were put together in the bowl. On the kitchen wall was a chart of food-values and compatibility, so that at the same time as we prepared our food we were learning a good deal about dietetics. No cooking was done at all during these first three months. We had everything raw.

After lunch, instead of the usual five minutes’ rest, it was a quarter of an hour’s walk, so that the fresh air and bodily movement would make the job of the digestive system easier, and by avoiding congestion we also avoided the usual feeling of wanting to doze.

After the walk we again repeated the procedure of the morning until five p.m., when we came back and prepared supper. By the way, the Professor used to say it takes a quarter of an hour to prepare a meal but you take an hour to eat it.

The evening meal consisted of a salad with not more than three mixtures, for instance, tomatoes, lettuce and root vegetables such as carrots. The proportions were most of the juicy vegetables (tomatoes), less of the leafy, and still less of the root. The root was chopped finely and a dressing was made of finely chopped onion, lemon and oil. A little oat flakes was sprinkled on if wanted, and the whole dish weighed not more than one pound and a half. Less could be taken if desired.

This diet, with the variation of fruits and vegetables, continued for three months. Sour milk was available, but at the time none of us liked it. Again, after the evening meal, we all went out together for a walk by the mountain-side, which usually ended up by a few folk-songs and choruses. Every evening was devoted to lectures of some kind, and a question-book was kept in which we all put down any questions or subject for discussion, and these formed the basis for evening lectures and discussions.

Each of us kept a daily diary, in which we put down our innermost thoughts and feeling and our reaction to the cure and our observations and record of our experiences. By this method Szekely got a good picture of our progress. A regular time allotted each day for mental work was recommended.

We were encouraged to solve problems as they arose; to analyze them, do what we could about them, and then put them out of our mind. Detailed attention was given to put the mind in good order.

We studied Esperanto, for the Professor only spoke a little English. The lectures were given in Esperanto, and Purcell translated. Unless you could speak German or French (I could speak neither), it was up to you to learn Esperanto as quickly as possible.

The importance of mental work was stressed, to keep our minds off ailments, so the evenings were put aside for lectures and discussions. A great field was covered during the whole period—Therapies, Science, Music, Art, and all the subjects that interested the individuals going through the cure.

(Editor’s note: lectures were ALL by the Professor!)

Next month: Depression! But the “building up” period begins…

NEXT
Origins of the Ranch, Part V