Origins of the Ranch, Part VII - Rancho La Puerta Learn about our health and safety protocols.

Health and the Daily Dozen—Professor Szekely’s simplest rules for healthy living, circa 1935-1950. 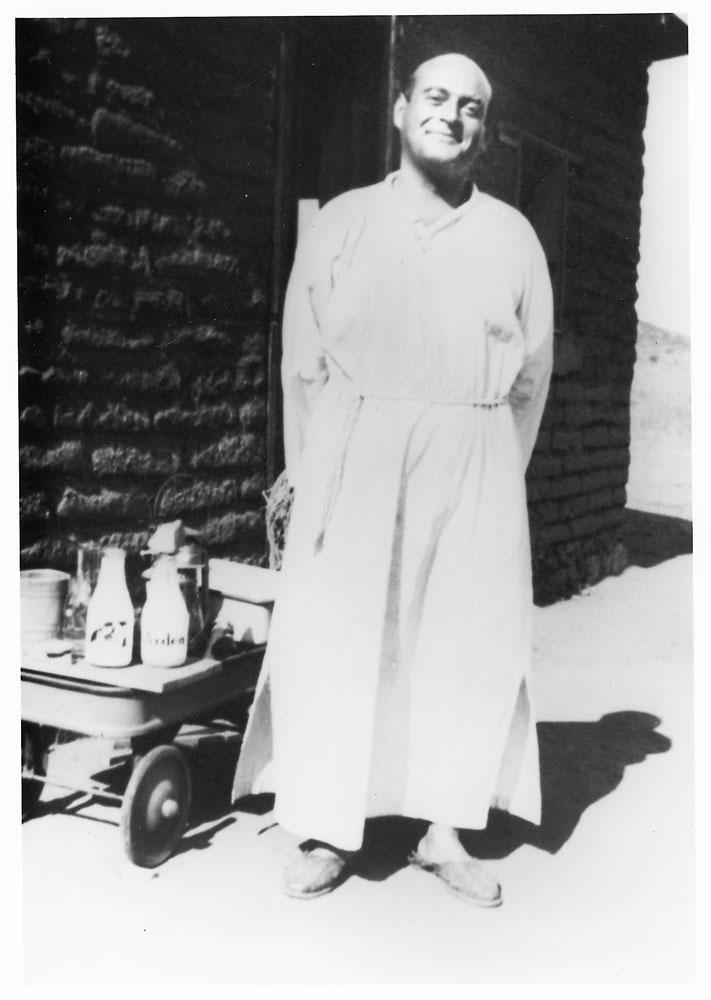 Last month we concluded a diary by Florence Mahon, an English health pilgrim, of her stay with Edmond Szekely at Lake Elsinore in 1935—a health camp that predated the founding of Rancho La Puerta by five years. If you read some of our previous installments, you’ll be astonished by the rigorous, demanding program she completed under the Professor’s tutelage. She not only got over several serious ailments, she thrived. The advice she received was very similar to something Professor Szekely wrote later—his “Daily Dozen.” We think you’ll find it remarkably prescient as to today’s accepted norms—and remember that this was pretty radical stuff back in the 1930s and ‘40s! …read more.

Health and the Daily Dozen
By Professor Edmond Szekely

ONE: When you wake in the morning do not get up in a hurry. Give the brain a chance to brush away the cobwebs of sleep. Stretch yourself, lie quiet for a few minutes, and then get up. A hasty start overstimulates the circulation and is a shock to the nerves. On the other hand, do not lie in bed and day-dream.

TWO: Before you dress do a few simple breathing exercises by the open window, followed by 20 or 30 trunk turning and forward bending exercises and 12 or more leg movements lying on the back. After the exercises take a good long cold or tepid shower, bath, or thorough sponge down. In summer, do the exercises in the open air and have a swim if possible.

THREE: Dress in light and loose-fitting clothes. Two light garments are warmer than a single heavy one. Linen or cotton are better than wool next to the skin as they set up a good friction. Wear sandals or light shoes on the feet. Avoid high heels.

FOUR: Start the day’s work without breakfasting. A morning meal interferes with the physiological process of elimination, which is most active in the organism till mid-day. Morning hunger is a habit. Once it is lost it never returns. At most, take juicy fruit and a glass of raw milk, with banana in cold weather. Children and manual workers need breakfast in cold weather.

FIVE: The morning is the best time for physical activity. Try and go for a walk or take other exercise before lunch. Walk some of the way to work. If you can, interrupt your sedentary work once or twice and go for a brisk walk or do some exercises. This will keep your mind fresh. When walking, swing the arms and walk on the ball rather than on the heel of the foot. Breathe rhythmically and deeply.

SIX: When you have a free morning, go for a swim, and sunbathe when the weather is warm. Even in winter it is possible to sunbathe in a spot sheltered from the wind. Sun, air and water are essential to health and, with proper food, the best insurance against colds and influenza.

SEVEN: Eat lunch between mid-day and one o’clock. A good plan is to have a light meal of juicy fruits and dried fruits only, as during the morning your body has been losing liquids, which need replacing. As a general rule, one and a half pounds are ample if the food is well chewed before being swallowed…Eat not more than three kinds of juicy fruit at a meal and not more than two dried fruits, e.g., dates and nuts or almonds and raisins, or figs and hazel nuts, or fresh cream instead of honey. Three ounces of dried fruit or its equivalent are quite sufficient, as these foods are very concentrated. In cold weather, eat some bread as well.

EIGHT: Do not indulge in violent exercise immediately after eating. Have a short rest and then go for a walk. The afternoon is the time for relaxation.

NINE: During the afternoon hours your body has been busy creating new cells, so when the time comes you need a more solid meal to replace the material used for their construction.

TEN: The evening is the best time for intellectual work. The health of the body depends on the health of the mind and emotions. Read good books, see good plays and films. Choose balanced people as your companions. Avoid chaotic and depressing influences. Also avoid sensational films, novels and plays, which lead to psychological disturbances. Do not listen to those who pour cold water on your efforts to lead a sane and rational life. Combat their negative attitude with an unshakable optimism. For this you need to cultivate the will. A well-regulated and ordered life is a great help to this.

ELEVEN: Do not go to bed for at least two hours after dinner. Your bedroom should not be heated. Sleep with the windows open or (where possible) out in a garden hut. Lie on the right side so as not to impede the beating of your heart. Learn to breathe through your nose. Before you go to sleep put all thoughts and problems from your mind. Sleep will then come of its own accord.

TWELVE: We are now back to where we started. If you follow these hints regularly you will slowly but surely improve your health…the rules given are for those who have no serious disease, but are in indifferent health through neglect of the rules of health. You will find it easier to follow this regime if you study one or two books which give the reasons why it is better to eat the things recommended here than the meat, tea, coffee, cocoa, white bread, white sugar, pastry, vinegar, table salt, alcohol, which most people eat through habit and because no one has ever taught them the laws of healthy living.

NEXT
Origins of the Ranch, Part VIII