Kuchumaa Passage stands at the edge of an oak grove as if it has been here forever. The sculptural wall, a parenthesis of brick, stone and glass, reflects the textures of the mountain. It also honors the indigenous culture of the Kumeyaay—Native Americans who lived in this San Diego/Northern Baja California region and walked as much as 100 miles to meet together at the base of Mt. Kuchumaa as a tribe. Here they enacted sacred ceremonies, worked out peace pacts, and shared ways to live harmoniously on the land.

How was Kuchumaa Passage created? Who built it? What does it mean?

The inspiration came from Sarah Livia Brightwood. Today she is the Ranch’s President. Back in 1990 she was deeply involved with reimagining the Ranch’s entire landscape plan (as she is today) and had a desire to build something on the Ranch to honor Mt. Kuchumaa, our landmark peak and spirit-guardian. 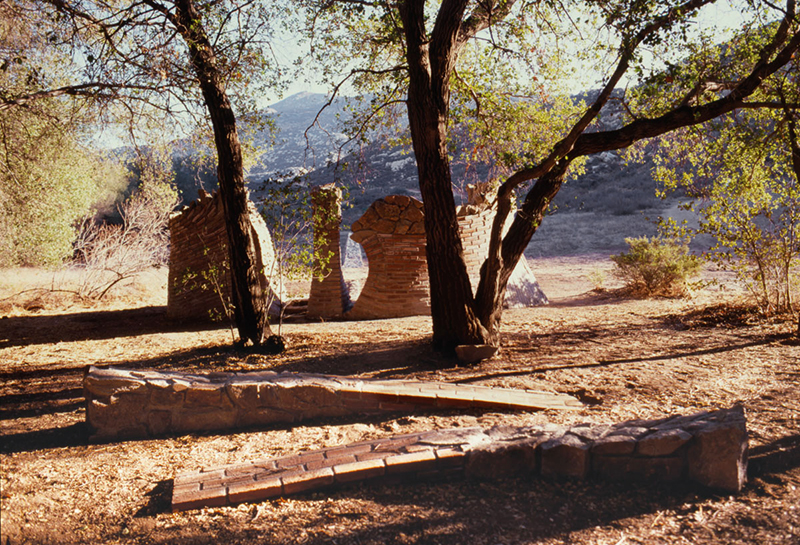 She contacted longtime friend James Hubbell, an artist who lives in Santa Ysabel in San Diego County, who is renowned for his sculpture, stained glass, painting and other artworks, and is the founder of Ilan-Lael Foundation. Guests at Rancho La Puerta can see his work in many places: from the flame-like windows of our administration/front desk building to our fireplaces in Oak Tree and Kuchumaa Gym. James had a long-standing dream to design and craft an organically sculptural building or monument with a group of students—a true team effort.

His friend, artist and community activist Milenko Matanovic, who heads Pomegranate Center in Issaquah, Washington, also had a desire to test how “community building,” creative thinking, and art can be joined in ways to make neighborhoods more livable, sustainable, just and socially engaged.

Led by this trio, the project was on!

James Hubbell began by reviewing letters from 300 applicants from around the world who described why they wanted to participate. Twelve apprentices were selected.

Sarah Livia chose an acre-large site with a mix of oak forest and a meadow with a beautiful view of Mt. Kuchumaa. She also provided a supply of local rock and brick and offered two experienced local stonemasons to assist with construction. It was agreed that the entire project would be designed and built in only ten days.

James and Milenko called it the Soil and Soul Workshop to allude to the two central goals for the workshop: the first to create environmentally sensitive shapes and forms that organically rest in, and celebrate, the spirit of a particular natural location; and the second to celebrate the human spirit with all of its diversity and creativity. 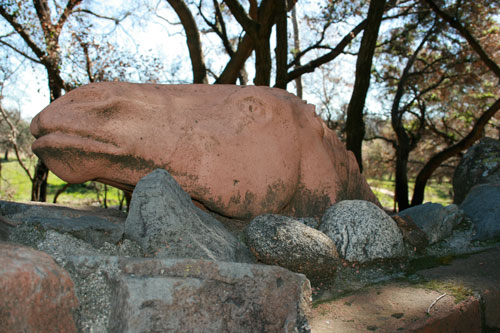 They organized the project in four phases:

The group started its work by studying the site’s textures, light, air, and water. All participants created drawings and paintings, studied local plants, and observed wildlife. They engaged in trust-building activities and allowed evening time for the participants to get to know each other. Sarah Livia taught the group about the history of the area and the Ranch. They hiked, discussed, meditated, interviewed individuals from Tecate and the Ranch, and in other ways immersed themselves in the power of the site.

On the third day, participants started to create a group vision for the project through a series of exercises. First every participant stood on the spot where they felt the project’s focal point should be. This led to the eventual decision to place the project on the edge between the oak grove and a meadow.

Then they looked for archetypal forms—circles, squares, lines, spirals, etc.—to begin to capture possibilities. They studied available materials. In the course of sharing individual insights certain ideas kept reappearing. For example, “a cupped ear listening to the mountain” was an idea that increasingly gained support. They worked in small groups to develop drawings and three-dimensional models made of clay. Each person spoke about their individual solution, and—to make sure that the process was about uncovering the best possible idea rather than fighting for the survival of a personal one—all clay models were considered together in the next round of designs. At the end, James took all proposals and synthesized them into the final clay model, with the group’s additional input and blessing.

The design includes two circular walls with benches facing the mountain. These two walls are on the edge of a stone circle that also leans toward the mountain. Four cardinal directions laid in the circle honor the Native American cosmology of The Four Directions. To better connect the woods, the Passage circle, and the meadow, a seating element and two low walls were placed along the axis of the entire project, and a rising wall was constructed in the meadow to further energize an alignment with the mountain.

The group gave an evening presentation to the Ranch leaders and several selected guests on the evening of the fourth day to explain the project, and received approval to proceed with construction from Sarah Livia and her mother, Ranch co-founder Deborah Szekely.

Working under the guidance of team leaders, the group started construction—laying the foundations, building walls, working with mixers, etc. This was intense but highly energizing work, made more meaningful because the hard labor celebrated important ideas uncovered during the previous stages. The connection between designing, planning, and construction was seamless and continuous. Unlike the standard architectural process where every detail is designed first design-build work incorporates many decisions that each participant makes along the way.

For example, the model of a horse’s head on top of the wall memorializes an experience the group had during a meditation in an oak grove deep in the mountains. A solitary white horse galloped in, reared its front legs up in front of James, bowed down to him, and turned around and galloped off. Everyone was very moved by this experience and Macario Olea, a local potter and artist (now part of an in-house staff of artists and artisans) who participated in the project, made the horse’s head that was eventually placed on one of the walls.

Throughout the ten days, the group experienced many other magical moments, such as an encounter with a rattlesnake that rose from the hole as they were preparing the site, and a visit from a coyote.

At the end of the marathon construction phase (completed five minutes before the opening celebration!), leaders from the Ranch and selected guests celebrated its opening with a ceremony. The following day the group departed, exhausted but uplifted by the project.

“All of us involved with the creation of Kuchumaa Passage at Rancho La Puerta trust that those who pause at the threshold will choose to stay awhile,” says Ranch President Sarah Brightwood today, “to reflect and connect with this special place and be touched by that ancient sacredness.” 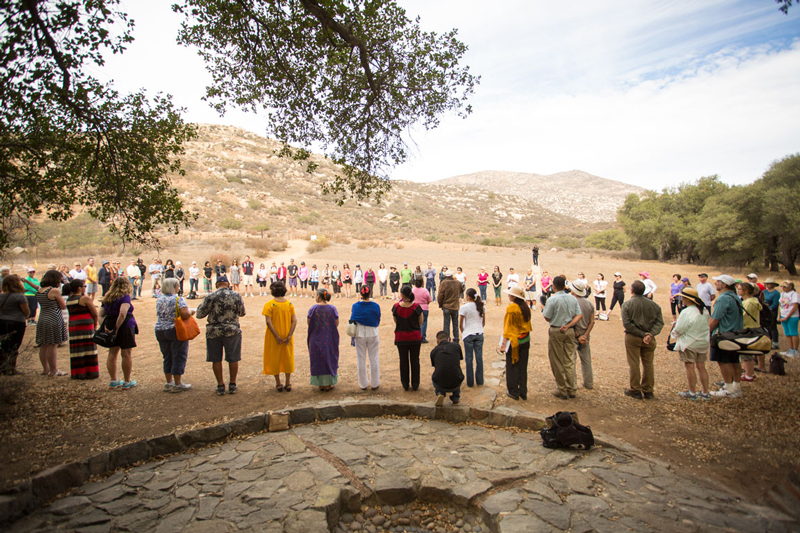 NEXT
Origins of the Ranch, Part XXXIV