A Shared History: Rancho La Puerta and Golden Door Both Welcomed Their Share of the Not-So-Shy

What do we mean by the “not-so-shy?” Recently the 200th issue of LIFE magazine (May 1988) was found in our archives: an issue that showed every cover (most of them featuring the faces of celebrities) in the magazine’s history. A surprising number of covers featured notables who had been guests at Rancho La Puerta and Golden Door. (The above photo shows Zsa Zsa Gabor stretching with famed yoga instructor Indra Devi at the Golden Door. Zsa Zsa, however, never attended Rancho La Puerta despite her and her mother being friends of Deborah Szekely.)

It was a different era. Actors and actresses came to both resorts because they could find no better way to enjoy a vacation as well as get in shape for their next role. Personal trainers, yoga studios, and local gyms had not burst on the scene in their home cities—at least not like the every-street-corner numbers of today. Others celebs, no matter what their claim to fame, wanted to look their best before the unflinching lenses of press photographers.

Without question, because of its exclusivity, the Golden Door welcomed more of these celebs than did Rancho La Puerta. Deborah Szekely, co-founder (with her husband Edmond) of The Ranch, founded Golden Door on her own in 1958. Success came quickly. Word spread 100 miles north in Los Angeles that a fun resort in the mountains of northern San Diego County was just the place for a tune up.

This particular issue of LIFE was a chance to look at every cover and try to remember who had been to the Golden Door. Unless you’re of a “certain age” (i.e. over 60)…or a fan of old movies…or knowledgeable about politics long ago, you won’t recognize many of these names. But give it a go.

As we mentioned, Rancho La Puerta had its fair share of celebs as well. Best known, perhaps, was Burt Lancaster, who even agreed to pose for some publicity stills at our bread oven! His photograph is always worth another look. 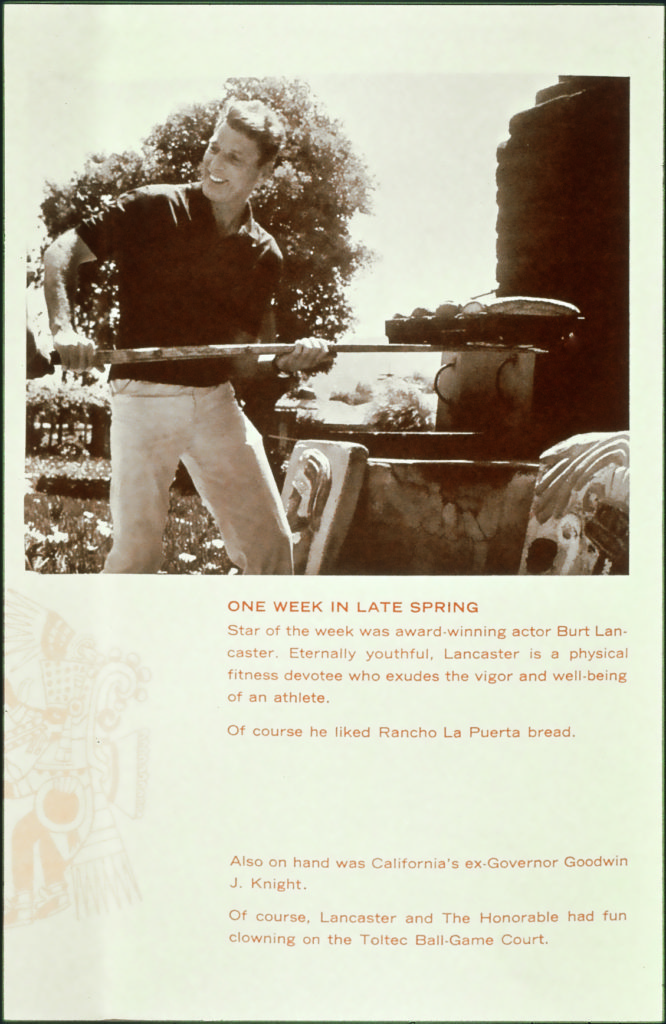 NEXT
Origins of the Ranch, Part LIV