Origins of the Ranch, Part XXV - Rancho La Puerta Learn about our health and safety protocols.

Water’s role in everyday health, fun and exercise at The Ranch: Part 1

The following story is from an unpublished history manuscript, circa 1987, with recent updates from Deborah herself.

The Professor had a connoisseur’s eye for lovely natural springs and streams. He carefully sited all his health camps beside exquisitely fresh little bodies of water. Tecate’s water table, only fourteen feet below the surface in the 1940s and ‘50s, had attracted him, as did Rancho La Puerta’s double blessing: besides the little Tecate River, and its intersection with a small creek coming down our valley, which we quickly dammed with a low rock wall for a swimming hole, the Ranch was the home of a spring. 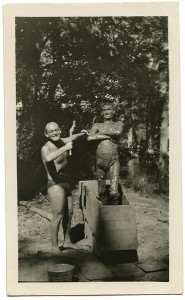 For centuries, infertile Native American women had made what were often long, arduous journeys to this Tecate spring which they identified by the two tall oak trees that touched above it in a manner suggestive of a door. Hence, Rancho La Puerta—the Ranch of the Door.

In 1895, a stone well was constructed to confine the spring. In 1953, we built a springhouse. At that time, Tecate still enjoyed regional fame for its wells and the quality of their drinking water. Tijuana waiters in that town’s best restaurants poured bottle Tecate water with a flourish, as they now pour water from the U.S. or Europe.

If you can’t live close to great drinking water, my husband thought it advisable that you buy it elsewhere—in other words, bottled water from natural springs. After all, water is the one substance that must be replenished for the human body daily, both inside and out. It should be as good—and as good to taste—as the food we eat.

The Professor required regular analysis of the Ranch’s drinking water supply. He was equally interested in water as habitat.

Long, long before hot-tub chic, the Professor customarily made appointments for friends, employees, consultants, salesmen, tradesmen et al to meet him at the pool, in which he spent a certain portion of the day. Many thought this a nonchalant manner of transacting business. As his wife, I knew that he suffered from severe arthritis, could scarcely rise in the morning before his one-hour soak, and sometimes used the pool and water exercise throughout the day to keep himself mobile and the arthritis at bay.

My mother, when living at the Ranch, still performed the water exercises she had learned at the Professor’s Tahiti camp. Rancho La Puerta quickly instituted such sessions for all guests, for we recognized that the resistance of the water increases the benefits of exercising muscles.

We investigated every aspect of hydrotherapy. At one time, I sent a daily truck to the ocean to fill 55-gallon drums with fresh water and seaweed. However, salt-water therapy, though I occasionally see it being revived here and there, did not test out to be an improvement over fresh.

Back in 1935, the Professor had already tested and discarded exercising in mud, a therapy that still crops up from time to time. Hoping it would be more controllable, I tried a mud bath on Ranch guests. But, despite its being an old-fashioned spa tradition, there’s no way that anyone has been able to make mud bathing completely hygienic. Another Ranch discard.

Next month: the Ranch invents its own hydrotherapy variations on the work of Father Sebastian Kneipp, and we get a visit from Mr. Jacuzzi himself.

NEXT
Origins of the Ranch, Part XXVI