How the Quote of the Day Chalkboard Came To Be

It may be one of the most photographed places at The Ranch. Hikers pass it every morning. Guests staying in the many casitas known as Arboles (the trees) can’t miss it. Almost everyone heading to any one of four gyms along the arroyo sees it. In short, it’s at a crossroads: a place of making a turn, a decision, a pause to…reflect perhaps. Or even have a chuckle or two.

Yes, the Quote-of-the-Day Chalkboard has become an institution in itself since its construction a decade ago. Like many delightful things at The Ranch, the chalkboard—and its embracing stone and mosaic cradle—arrived as the result of pure whimsy. It just sounded like fun, and so one day the decision was made to build it.

Before we get into the story of how it came to be, we should say that there’s a great deal of tradition behind a love of quotations at Rancho La Puerta. Edmond Szekely, with his prodigious intellect and memory, could quote the great philosophers at length. Co-founder Deborah has such a love of inspiring quotations that she once gathered together 365 of her favorites in a publication for her guests at the Golden Door.

This correspondent remembers more than one management meeting many years ago at The Ranch where the idea of sharing a “quote of the day” with guests was seriously considered…but the idea of delivering little slips of paper to 83 different casitas every morning was daunting, not to mention rather un-ecological.

Meanwhile, one of the Ranch’s landscape and building designers, Enrique Ceballos, and some of the stonemasons on staff were building a number of curvilinear walls on the property. What if one of these beautiful walls—or a similar stone architectural element—could hold a chalkboard of some kind: one where a new quotation appeared mysteriously every morning?

Being an expert on chalkboards (I was a “monitor” in second grade, after all), I volunteered to find a “real” piece of slate. This was easier said than done: slate isn’t common in California. One doesn’t just drive over to the nearest quarry.

But billiard tables are as common here as anywhere, and the best ones feature a green felt playing surface atop an incredibly heavy slab of slate.

So I contacted Olhausen Pool Tables in San Diego, which happens to be one of the largest manufacturers of tables in the country.

Perhaps they had a large piece of slate, even one that had broken in half, that they’d be willing to sell?

Well, yes they did.

“Are you kidding?” the sales rep said.

We decided on about half-a-table’s worth of slate: a piece about 4 by 4 feet. I drove over that day in an SUV to pick it up. It weighed…oh…maybe 400-500 pounds. It was like sliding a piano into the back of my Acura MDX. The rear shocks were maxed. The front end of the car looked “lifted” in the parlance of low-riders everywhere.

Next stop: the outskirts of the biggest cemetery in San Diego County. Around the edges of this gloomy place one could find the workshops of several headstone carvers. I felt that if the slab o’ slate was going to rise out of an organic freeform wall, the profile of the slate’s top edge could be the same as the Mt. Kuchumaa skyline.

The headstone carver looked at me, looked at the slate in the back of my car, and said,

“Why? Is this a gravestone or what?”

It took awhile to explain the concept. I sketched the skyline in chalk. He said he’d cut it with a giant band saw, hone it smooth, and it would be ready in a few weeks.

The border crossing was without incident. Five hundred pounds of slate was, apparently, not a threat to the U.S.-Mexico balance of trade. I’d need new shocks for the car much sooner than later…but everything else went well.

Meanwhile, two Rancho La Puerta guests who happened to be from Marin County and who happened to be accomplished tile-mosaic artists and who happened to be simply great at leading community art projects took on the joyful task of making the big gray slab look beautiful. Some other guests pitched in, too. Thanks to artists Linda Weill and Tilly Nylin, the slab was encrusted with a colorful menagerie of local critters, a winding path, a nice brace of poppies, and a small pond.

Soon the wall—more like a monument’s base—went up. The slate was cradled. Artists Tilly and Linda were most pleased. So were we all.

And Barry Shingle and the fitness crew took on the task of chalking in the new sayings…and here we are today, thousands of handwritten quotations later, featuring everyone from Thoreau to Beyoncé.

So the next time you’re at The Ranch, we hope you’ll enjoy the saying of the day chalkboard, for it, like Rome “…wasn’t built in a day.”

(And that, dear friends, is a quote from John Heywood‘s A Dialogue Conteinyng the Nomber in Effect of all the Prouerbes in the Englishe Tongue, c. 1538.) 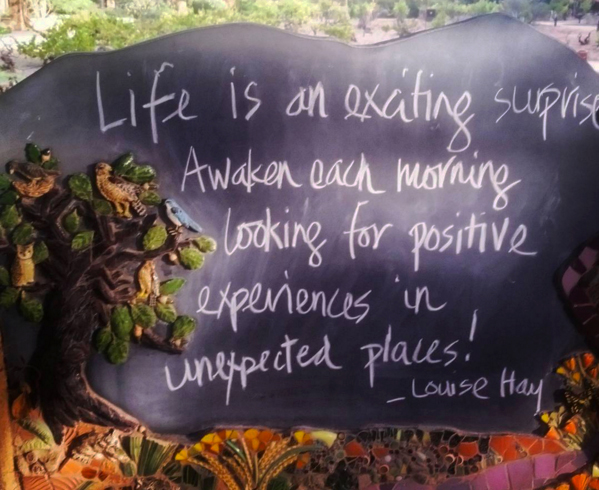 NEXT
Origins of the Ranch, Part XXXVII