The Quest for Inspiration with Leslie McGuirk - Rancho La Puerta Learn about our health and safety protocols. 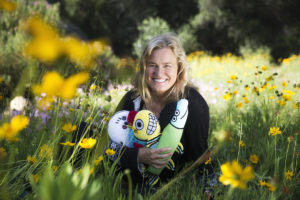 What does it mean to be truly inspired?  And what does it mean to be creative?  The two go hand in hand.  The unfortunate thing is that many people believe they don’t have a creative bone in their body when in fact everyone is creative and artistic in some way or another.  Often times, we are told we are not creative during childhood and grow up believing it.  Don’t believe it!

This happened to Leslie McGuirk, the well known children’s book author and illustrator who teaches a series of classes at the Ranch called The Quest for Inspiration.

“Her workshop, on how to have inspired creative thoughts (The Quest For Inspiration), came out of her belief that creativity should be a vital part of everyone’s life. She developed a series of exercises that help people break habitual thought patterns. When the thinking mind takes a rest, then inspired thoughts have a chance to appear.”

I was lucky enough to take Leslie’s class recently. It was a treat. Leslie herself is an inspiration.  Just hearing her speak about how she became a successful artist and illustrator after being told she wasn’t talented as a child was enough to get me motivated. But really, that’s what the course is about.  Not believing assumptions and judgements made by others and opening yourself up to the possibility of being creative.

During the class we did some fun mind stretching exercises, and I loved one in particular. We paired up with a stranger in class and were told to write the first thing that came to mind when we were asked what color, what type of music and the type of car we thought the other person was.  I was surprised by the answers, but it made me look at myself in a whole new way.  For instance, I’ve never thought of myself as the color red, but that’s what my partner chose for me!  She also said I was a Porsche…again, surprised, but happy!

The crux of what I took from the class is to be open to finding inspiration everywhere and listen to your gut.  Keeping an open mind about yourself and life in general opens doors to discovering inspiration.  Listening to your intuition will help you decipher which direction to go.  Leslie had some amazing stories of how her intuition led her to success.

Pay close attention to what you come across in your own life – it might inspire you and lead to magical things!

You can learn more about Leslie on her site, lesliemcguirk.com.  Leslie will be presenting at the Ranch May 31 and July 12, 2014.