Today we call it a “museum:” the adobe house we pulled up to that first day. In truth, it was not a house at all—it stored hay. The first time I saw it my reaction had nothing to do with pleasure or nostalgia. I was shocked: no windows; no doors; a dirt floor, with bare earth outside in every direction; a newly dug outhouse nearby.

But the dirt floor didn’t bother me. Nor did the outhouse. I was used to this kind of living, growing up with my parents in primitive conditions in Tahiti and during their trips to Mexico on several health-camp retreats.

I suppose that, newly married, I hoped for more, but I loved the man, worshipped him, and believed everything would work out.

We moved in. We were camping out. But it was fun. Every day was a challenge. We got it done. And we always thought it was temporary.

We had a high wooden bed platform topped by a thin mattress. Edmond kept six large suitcases under the bed, each full of papers and books. Of what little he owned, these were most vital—his precious library. My possessions fit in one suitcase.

The first friend to help us, other than my parents, was Bud Schroeder, who drove us to Tecate. He was one of the Prof’s students. Where would he sleep? There was another shack nearby that had stored grain, and it was probably the one we tore down later and discovered that the adobe walls were nothing more than a maze of rat freeways. I’m serious: the plaster was just a veneer. Bud would stay and help us for 15 years… 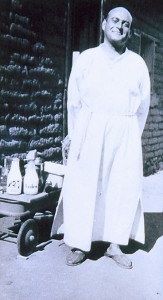 How to meet the townspeople? The Prof was a Mason, so he went to the local Lodge where his first contact was the train’s stationmaster, Fernando Ceseña. He became a very good friend. He helped with paperwork on legal matters and loved the Prof and believed in his teachings. He, like many others, saw the Prof as a brilliant man who had somehow come to live in Tecate because of the war.

Fortunately, we both spoke Spanish. We’d been in Uruapan, Mexico, earlier that year, and we both had a gift for learning languages. As a child, born in Brooklyn to Jewish parents, I had little idea that I would soon be living in Tahiti and starting classes at the local elementary school that were taught entirely in French. But one learns…one must.

The Prof, however, did not speak English. At home we spoke only French. Even in the few months that we lived in Los Angeles before arriving in Tecate, he spoke mostly Hungarian—for we stayed with Hungarian friends.

When the first guests arrived, I had to learn to cook for 15 to 30 people, guests and staff. The Prof bought me a surplus stove in San Diego that had once been aboard a tuna boat. We called it The Monster. It burned diesel fuel—yes, diesel—and was red hot in the center. It could burn beans in a minute.

For our first Christmas, I gave him a recording of Beethoven’s Ninth. A Hollywood friend had given us a hand-cranked phonograph, and it was the most expensive wonderful portable ever. I can still hear the music…

He gave me my dream gift: a “gasoline iron” from the Sears Roebuck catalog, a page I pointed out to him again and again by leaving it open to that very item…

…so many stories, so many memories. Somehow we survived and thrived. Again, it was our friends who saw us through. It always was so. It always will be so.

As I write this, the date our first guests arrived 75 years ago— June 23—fast approaches.

Yet I find it much easier and great fun to write about my new life at 93. I’m having a wonderful time in the moment, and looking to the future. I have moved to a new house: a fascinating mid-Century Modern design by Sim Bruce Richards, a disciple of Frank Lloyd Wright. It’s half the size of the century-old home I lived in for 60 years. I’ve moved, stored, or given away a lifetime of furnishings, collections, and paperwork. This was, to say the least, a challenge.  Since everyone was telling me they wanted to see the house, a hundred or more friends came over last weekend for a street taco fiesta in my driveway.

Frankly, I’m too busy to spend much time looking back 75 years. I’m so tantalized by the future. I’ve never been 93 before. It’s a whole new adventure! Thank you all for being part of my Rancho La Puerta family.