Award-winning producer Paula Mazur will screen two of her films and share a behind-the-scenes look at producing projects about the human spirit.

A Producer’s Vision – Stories of Human Connection
What exactly does a producer do? Is it the glamorous career it seems to be? Award-winning film and TV producer Paula Mazur will share how she produces projects with emotion and humor, explorations of the human condition in a market packed with comic book titles. Choosing the right projects, casting stars that “greenlight” a film, coercing financiers to bet millions on you, surviving the rigors of creation, and flourishing in the Hollywood shark tank will all be covered in this behind-the-scenes talk. In addition, Paula Mazur will screen two of her most recent films which will include a brief Q&A.

The Guernsey Literary and Potato Peel Pie
How do you take a worldwide bestselling novel and make it into a hit film? With fortitude, certitude, and gratitude! Award-winning film producer Paula Mazur will screen her recent film The Guernsey Literary and Potato Peel Pie, starring Lily James and an all-star British cast. She will discuss the ten-year process of bringing this love story with its WWII backdrop to the big screen, a journey that navigated through 7 leading ladies, 4 studios, 4 directors, and a fabulous flat in London. With no roadmap to success and each film a mountain to climb, here is a peek behind the scenes.

The Man Who Invented Christmas
There is an endless appetite for holiday films. But how about a smart, deep, moving, funny one? Award-winning film producer Paula Mazur will screen her film The Man Who Invented Christmas, starring Dan Stevens and Christopher Plummer, in which Charles Dickens comes to write his iconic holiday tale, A Christmas Carol. She will discuss the artistry of weaving layered storylines into a seamless narrative; describe creating 1843 London in modern Dublin; share how period costumes were made to order for an enormous cast in mere weeks; and why brilliant actors, composers, craftspeople flocked to this story of the revered author. 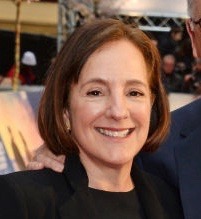