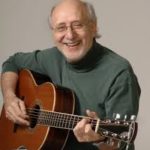 Peter Yarrow’s commitment and life’s work have been framed by his awareness that music of conscience can be extremely effective when used as a source for inspiring and uniting efforts to heal and create a better world. As a performer and social activist, Peter has used music in just that way, bringing people together to create a more just, peaceful, and compassionate society. Through such efforts, beginning in the early 1960’s, the music of Peter, Paul and Mary became, for literally millions of people, the genesis of their activism and commitment to advancing positive social change. Peter’s gift for songwriting has produced some of the most moving songs in the Peter, Paul & Mary repertoire including “Puff, the Magic Dragon,” “Day is Done,” “Light One Candle,” and “The Great Mandala.” Currently Yarrow’s efforts are mainly focused on the non-profit, Operation Respect (OR) with its classroom-based program called “Don’t Laugh At Me” (DLAM) that utilizes music and the arts combined with social/emotional learning curricula for elementary and middle school children, now utilized in over 20,000 schools worldwide. Peter believes that DLAM and other such programs that build community and catalyze positive attitudinal and behavioral change, can enable today’s children to break the cycle of hatred, bias, racism and bullying, helping them to envision and create a more just and peaceful world.