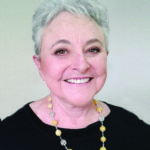 Sylvia Boorstein has been teaching Dharma and mindfulness meditation since 1985. She is a founding teacher of Spirit Rock Meditation Center, a psychotherapist, wife, mother, and grandmother. She is particularly interested in emphasizing daily life as mindfulness practice and including informed citizenship and social activism as integral to spiritual maturation. Her books include: It’s Easier Than You Think: The Buddhist Way to Happiness (1997); Don’t Just Do Something, Sit There: A Mindfulness Retreat (1996); That’s Funny, You Don’t Look Buddhist: On Being a Faithful Jew and a Passionate Buddhist (1998); Pay Attention for Goodness’s Sake: The Buddhist Path of Kindness (2003), and Happiness is an Inside Job: Practicing for a Joyful Life (2008).  She has visited and taught at Rancho La Puerta since 1972.