Singing Together: Creating Resilience and an Antidote to Fear - Rancho La Puerta Learn about our health and safety protocols.

By bringing peoples’ hearts together in song, music can be a catalyst for creating community and sharing a “pool of peace”. 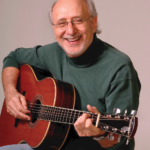 Peter Yarrow’s commitment and life’s work have been framed by an awareness that music of conscience can have an extraordinary effect when utilized in efforts to transform and heal society. As a performer and social activist, Peter has used music to bring people together to create a more just, peaceful, and compassionate world. Through such efforts, beginning in the early 1960’s, the music of Peter, Paul and Mary became, for untold numbers of people, a source of inspiration that led to their activism and a lifelong commitment creating positive societal change.