The Mercado at Rancho La Puerta has a beautiful collection of Mexican Folk Art including this Arbol de la Vida, or Tree of Life (below), from the central Mexican town of Metepec.  Arboles de la Vida are intricate clay sculptures thought to have  evolved stylistically from candelabras that decorated mission churches built when the Spanish spread their faith throughout Mesoamerica. To share the story of the Catholic faith’s biblical figures and gospels, the friars commissioned Trees of Life from indigenous potters and had them depict biblical figures and stories to tell the story of the gospels. 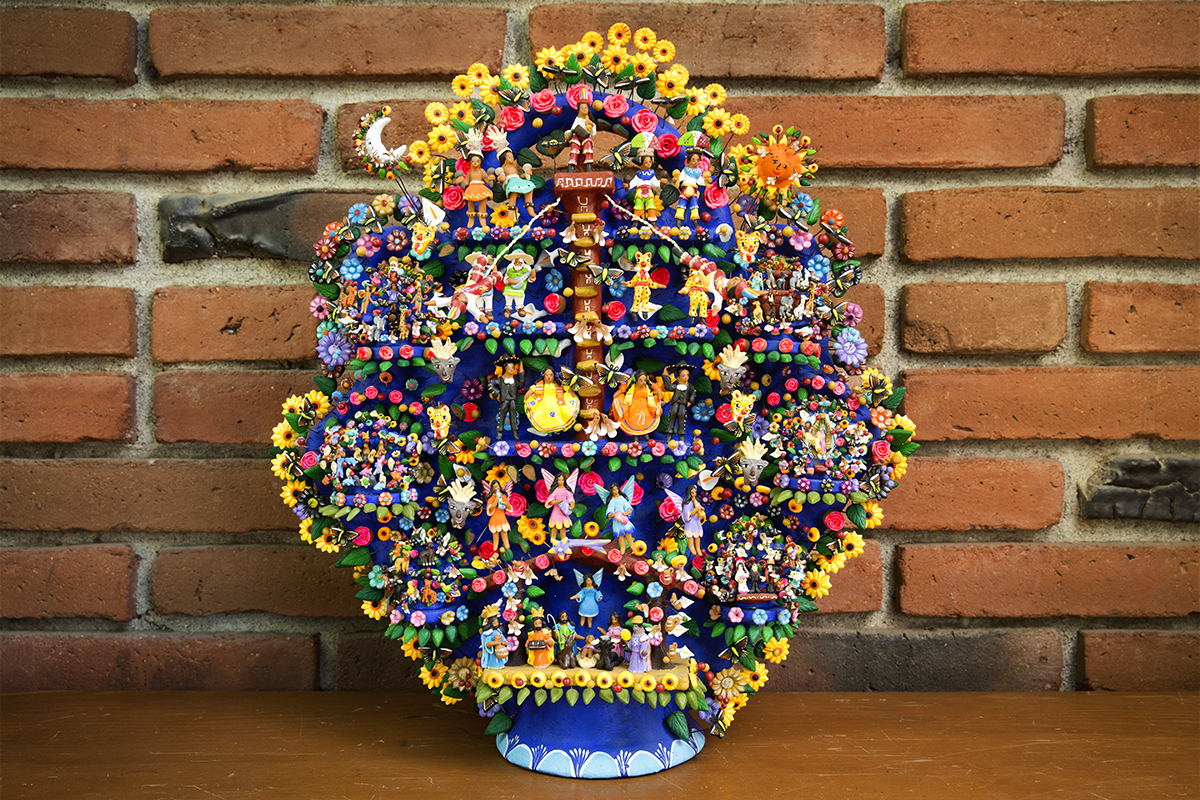 The idea of trees being symbols for Grand Narratives was not foreign to the central Mexican natives. Trees figured prominently in pre-Colombian Mesoamerica. For example, the ceiba tree was thought to be a bridge from the earth to the heavens and a symbol of life; it is still revered in parts of Mexico.

Modern Arboles de la Vida from Metepec are made by mixing local clay with ash from burnt corn stalk. This forms a chalky barrier between the clay and work tables where this sticky moist soil is manipulated and shaped into tiny beautiful sculptures.  Arboles de la Vida began as vehicles for biblical narratives, and now they depict the stories and culture of the artists who create them. Some have figurines and tableaus depicting family events and biblical stories mixed with Mexican mythology. 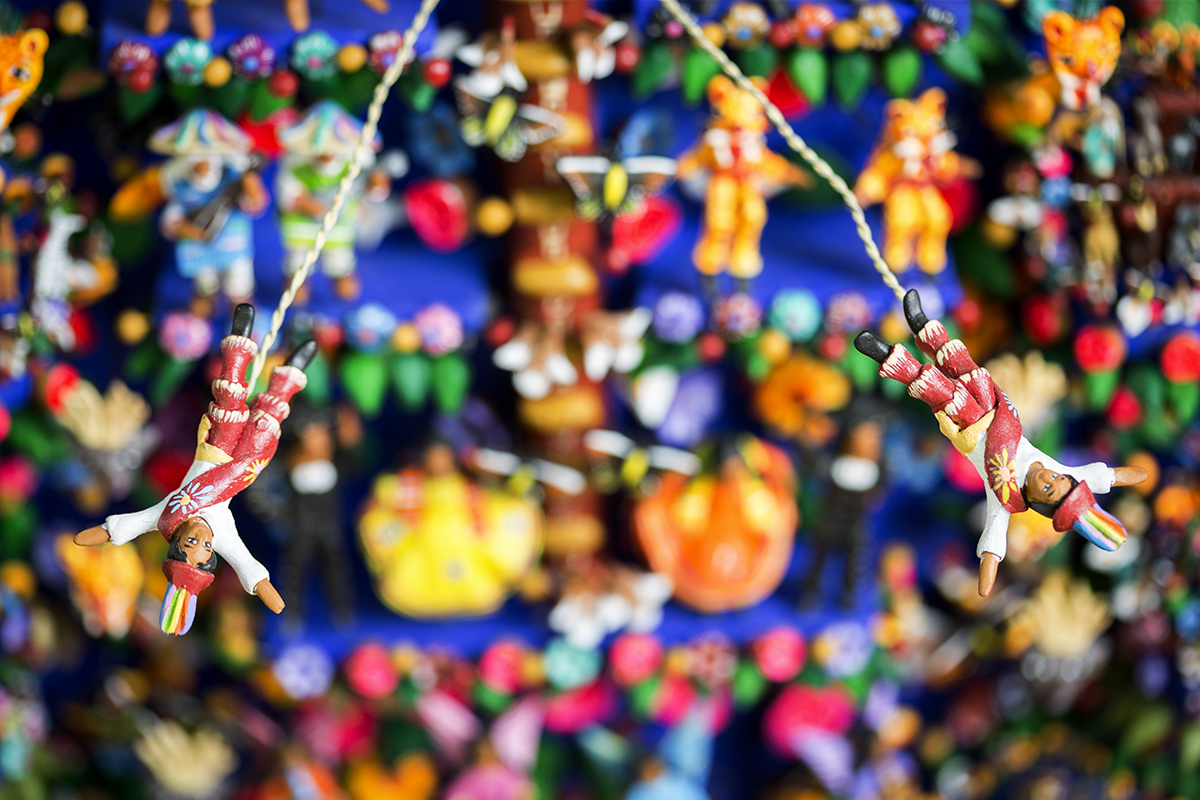 This particular tree of life (above) embraces the story of Danza de los Voladores, or The Dance of the Flyers, from central Mexico. The Dance of The Flyers dates back to ancient Mesoamerican ceremonies as a plea to the gods to end a drought. The story goes that the tallest tree in the forest was sought, cut down, trimmed and then brought to the village square. Once there, it was erected and five men climbed this pole. One man sat at the top, and he represented the sun and played the flute. The other four men honored north, south, east and west, as well earth, wind, fire and rain. With ropes wrapped around the pole and each of the dancer’s waists, the four leaped off, spinning around the tree, their ropes slowly unwinding until the dancers reached the ground. Their colorful costumes are thought to have represented birds, which were considered gods of the earth. A blood red sash represented sacrifice.  Today, some communities still perform this ceremony on tall metal poles. 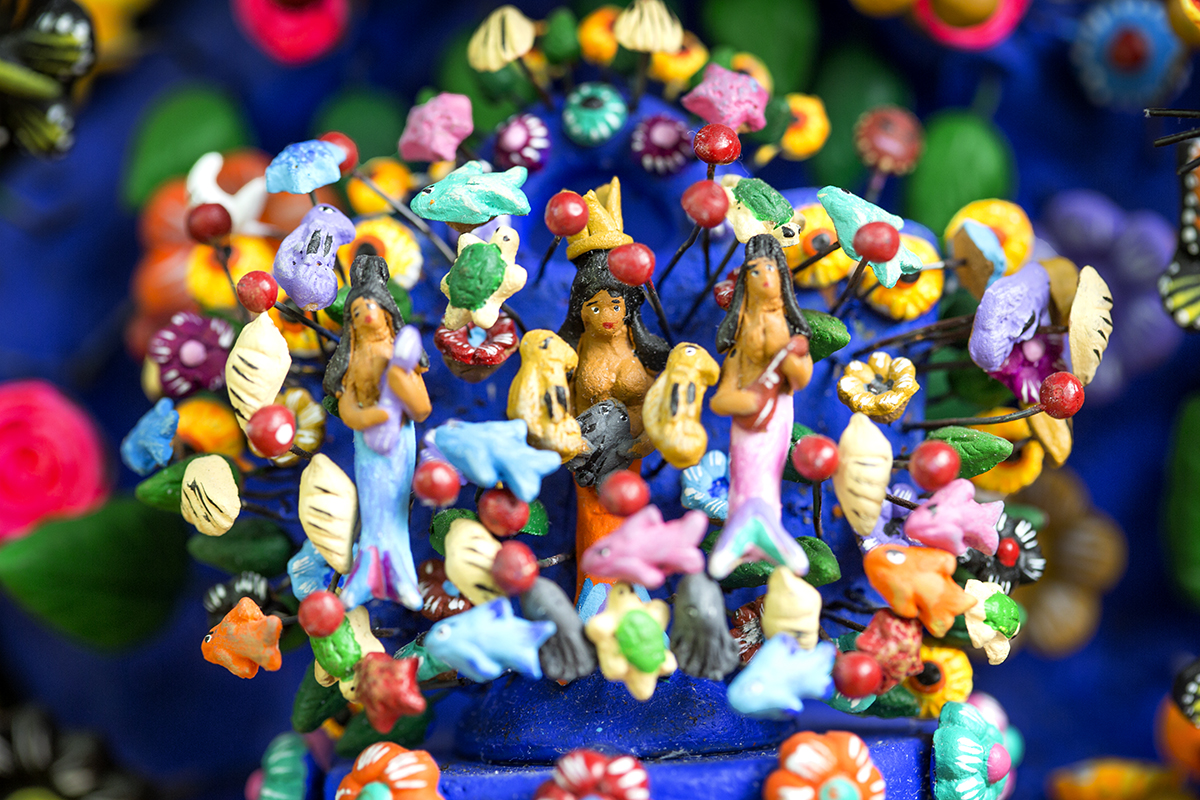 Mermaid stories, as in the tableau above, came along with the spread of the Spaniards. Mermaids, or Sirenas, were embraced by the indigenous people since they were interpreted to be the goddess of water and fertility and the rulers of streams, rivers, fishermen and seafarers. In Nahuatl, a language of central Mexico, Chalchiuhtlicue means, “she who wears a jade skirt.” A mermaid’s scales could easily be an interpretation of this jade skirt. In the Arboles de la Vida pictured above, maidens and animals surround the crowned mermaid in an undersea kingdom. The mermaid is a reminder of Spanish folk tales.

To learn more about the availability of the different Arboles de la Vida please contact the Mercado.