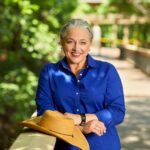 Georgia-born French-trained Chef Virginia Willis has made chocolate chip cookies with Dwanye “The Rock” Johnson, foraged for berries in the Alaskan wilderness, harvested capers in the shadow of a smoldering volcano in Sicily, and beguiled celebrities such as Jane Fonda, Bill Clinton, and Julie Chrisley with her cooking — but it all started in her grandmother’s country kitchen.

Virginia is a chef instructor for the digital streaming platform Food Network Kitchen and author of Secrets of the Southern Table: A Food Lover’s Tour of the Global South, Lighten Up, Y’all, Bon Appétit, Y’all, Basic to Brilliant, Y’all, Okra, and Grits. Lighten Up, Y’all: Classic Southern Recipes Made Healthy and Wholesome received a 2016 James Beard Foundation Award of Excellence. She is the former TV kitchen director for Martha Stewart Living, Bobby Flay, and Nathalie Dupree; has worked in Michelin-starred restaurants; and traveled the world producing food stories – from making cheese in California to escargot farming in France. She has appeared on Food Network’s Chopped, CBS This Morning, Fox Family and Friends, Martha Stewart Living, and as a judge on Throwdown with Bobby Flay.

She’s been featured in the New York Times, the Washington Post, Eater, and Food52 and has contributed to Eating Well, Garden & Gun, and Bon Appétit, and more. The Chicago Tribune praised her as one of “Seven Food Writers You Need to Know.” Her legion of fans loves her down-to-earth attitude and approachable spirit. Learn more about Virginia and follow her traveling exploits at www.virginiawillis.com.

Chef Virginia offers hands-on culinary experiences, 3.5 hours each, during which you will enjoy preparing your own meal along with fellow cooks. Classes take place at La Cocina Que Canta, our culinary center on Tuesday and Wednesday at 4pm.

Tuesday Hands-On Cooking Class 4:00 PM Sign Up
Each class $125+tax. Class subject to change, check your weekly planner and schedule for updates. The maximum number of guests per class is 8.

Wednesday Hands-On Cooking Class 4:00 PM Sign Up
Each class $125+tax. Class subject to change, check your weekly planner and schedule for updates. The maximum number of guests per class is 8.